Not The Only Scor(e) ...Paul Doolin recalls the club's association with Scór and Scór na nÓg. 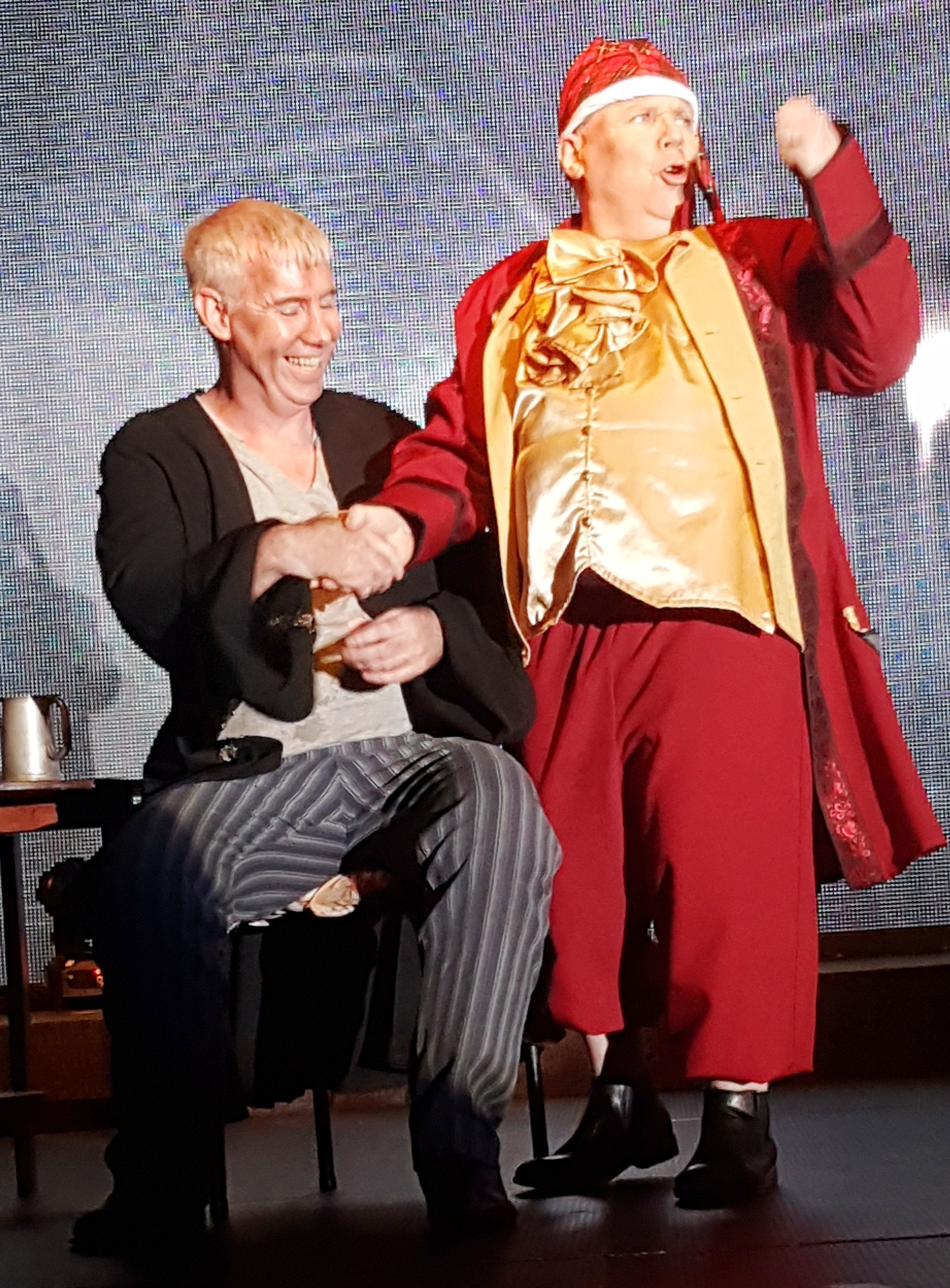 Published: about 2 months ago

Paul Doolin has been a man of many parts in Mullingar Shamrocks for several decades now. A former PRO whose fine words have appeared on several occasions in the Remember the Team series, a former Cultural Officer, a coach and team manager at under-age level, Paul's contribution has been immense over the years.

Paul has referred to the mother-in-law as Mrs Scór on occasions and it is fair to say that Paul himself is Mr Scór in Mullingar Shamrocks. The man of many parts is also an apt description for the many different roles adopted by Paul in numerous Shamrocks presentations over the years ranging from Stars in Your Eyes to his most recent role in Les Miserables in our brilliant The Sound of the Musicals show. Here, In Not the Only Scor(e), Paul presents his memories of Mullingar Shamrocks involvement in Scór and Scór na nÓg.

As has been pointed out on many an occasion, Mullingar Shamrocks is not just a Gaelic Football club, or for that matter a GAA Club, it is and always has been much more than that. For those of us too long in the tooth, or simply not able to kick doors on a Halloween night, there are other mediums within the club where we can throw the shoulder behind the wheel and wear our colours with pride as much as any player on the field. In recent years large fundraising event have drawn together all sorts of people who simply want to support the club and who are more than happy to declare ‘I’m a Shamrock’

For many years though the club has been populated by a group of people who have been wearing that mantle through the medium of Scór. For the uninitiated, and there are many, Scór is a competition organised by the GAA to promote and preserve our traditional culture and has eight disciplines, Figure Dancing, Solo Singing, Recitation, Ballad Group, Instrumental Music. Question Time, Novelty Act and Set Dancing. Established in the late 60’s by the late Derry Gowan, from the outset, Shamrocks embraced the competition and under the direction of Detty and Rob Cornally and with several other pioneers, the club began to make their mark at county and provincial level. Indeed, Shamrocks is one if not only Urban club that has taken part in Scór every year bar none in the 50 odd years since the competitions inception

Our youngsters were not forgotten either and they are catered for by Scór na nÓg which caters for the under 16s. Indeed, the old saying is so true here, ‘Mol an oige agus tiocfiodh si’ as our club has been to the forefront of Junior Scór for many years with tremendous work done by the likes of Patsy Rylands, Mary and Paul Doolin and many others who gave these kids the opportunity to represent the club. Indeed, our own Conor Moore cut his teeth in a Novelty Act many moons ago and often talks about it.

After many years of minor success, and there were many years, the real prize still escaped the club, an all-Ireland title. But that was all to change in the John McCormack Hall, Athlone on Saturday 18th of February 2006 when the Scór na nÓg ballad group team of Mark Irwin, Rory Hughes, Gemma McNamee, Aoife Gavin and Katie McCarthy were announced as winners of Celtic crosses and we had broken our duck. Coached by the late Catherine Kelly and Tony Irwin they had produced the goods as they say and we were on the roll of honour at last. Those celebrations lasted for weeks and the club celebrated as one but it was just the beginning as the potential of years gone by now became a quest for more national titles. Mark would go on to international stardom as a West End star, Gemma became a stalwart for all things Shamrocks and even directed our first musical Grease, while Katie was not done winning titles and added the Solo Singing All-Ireland title 12 months later and now the bar had certainly been set. Our first Senior title came in the glorious year of 2007 when Shamrocks had 3 representatives in the All-Ireland final, our figure dancers, our novelty act team and Mary Hughes in the recitation and it was the latter that took home the first Senior Celtic cross after a remarkable performance to defeat 3 former champions

Our Senior figure dancers were always the bright hope in the club and were immensely successful winning 13 county titles in 15 years, a record unsurpassed anywhere in the country and they added another 8 Leinster titles to that tally for a remarkable sequence that saw them dance in the All-Ireland finals bit unfortunately never come home with the big prize, a fate similar to our neighbours The Downs who have contested almost double that tally in Junior and Senior Set Dancing and amazingly have suffered the same fate. At times it is utterly heart-breaking and soul destroying but such is the nature of competition, they took it on the chin and came back again and again and again which is a measure of their resilience and determination.

Much the same could be said of our Novelty Act team who were highly successful at county and provincial level with forward thinking and game changing sketches that captured the imagination of the viewers but not the judges at the highest table. Defeat in 3 All-Ireland finals seemed to have sucked the life out of the group but after a brief hiatus they decided to give it one more lash in 2010 and on a memorable afternoon in the INEC Killarney Westmeath’s own Fear an Ti Seamus O'Faolain made that faithful statement ‘if at first you don’t succeed then try, try and try again’ by the end of which the Mullingar Shamrocks team were up on the stage looking for their medals. Aaron Purcell, Gemma McNamee (her second) Mary Irwin, Mary Hughes (another second title winner for Shamrocks), Robert Ryan, Paul Doolin and Joe Earley had succeeded where so many other fine groups representing the club had failed but were remembered in the celebrations that rocked Killarney to its very core.

Five barren years passed from that night but we were not done yet and an itch that needed to be scratched saw the novelty team go at it again. County and Leinster titles secured they set out for City West Dublin and this time Robert, Paul and Joe were joined by Martin Coyne, Paul McDermott and Rebecca Doolin for title number two. The joy on the other member’s faces was eclipsed by the sheer emotion of Martin and Paul McDermott, two club stalwarts who had at last something to remind them of their dedication to the club. The celebrations lasted for days and the most of it is now a blur but Shamrocks were now on the map as one of Irelands most successful Scór Clubs. An interesting anecdote is that Robert Ryan has competed twice in Scór and has never lost!!! The Rasher is obviously a good luck charm or a lucky fecker.

While the nature of Scór is competition, and strong competition at that, it has always been the social element that has appealed to participants. County, provincial and indeed national titles were welcomed with fervour but the bonds that developed between people were every bit as important. The support we got from club and county was appreciated and we all shared each other’s triumphs and failures with the same motto ‘winners never quit’. The bonds and friendships developed with so many other GAA people stands the test of time and Shamrocks people are instantly recognised and welcomed at any Scór competition anywhere in the country and the club is synonymous with camaraderie and fairness. Indeed, many of our champions have now gone on to adjudicate at all levels and their experience is requested nationwide to this day and long may it continue. A story to reflect our commitment is the current County Secretary Mary Doolin, who replaced her aunt Rose Longworth who gave 50 odd years’ dedication to the job, daughter of Rob Cornally and Detty who gave their lives to Scór. Indeed, the current figure dancing cup is named after Rob and this year for the first time ever Shamrocks got to take it home. That more than anything explains the grá that we have for Scór in Mullingar Shamrocks and long may it continue.