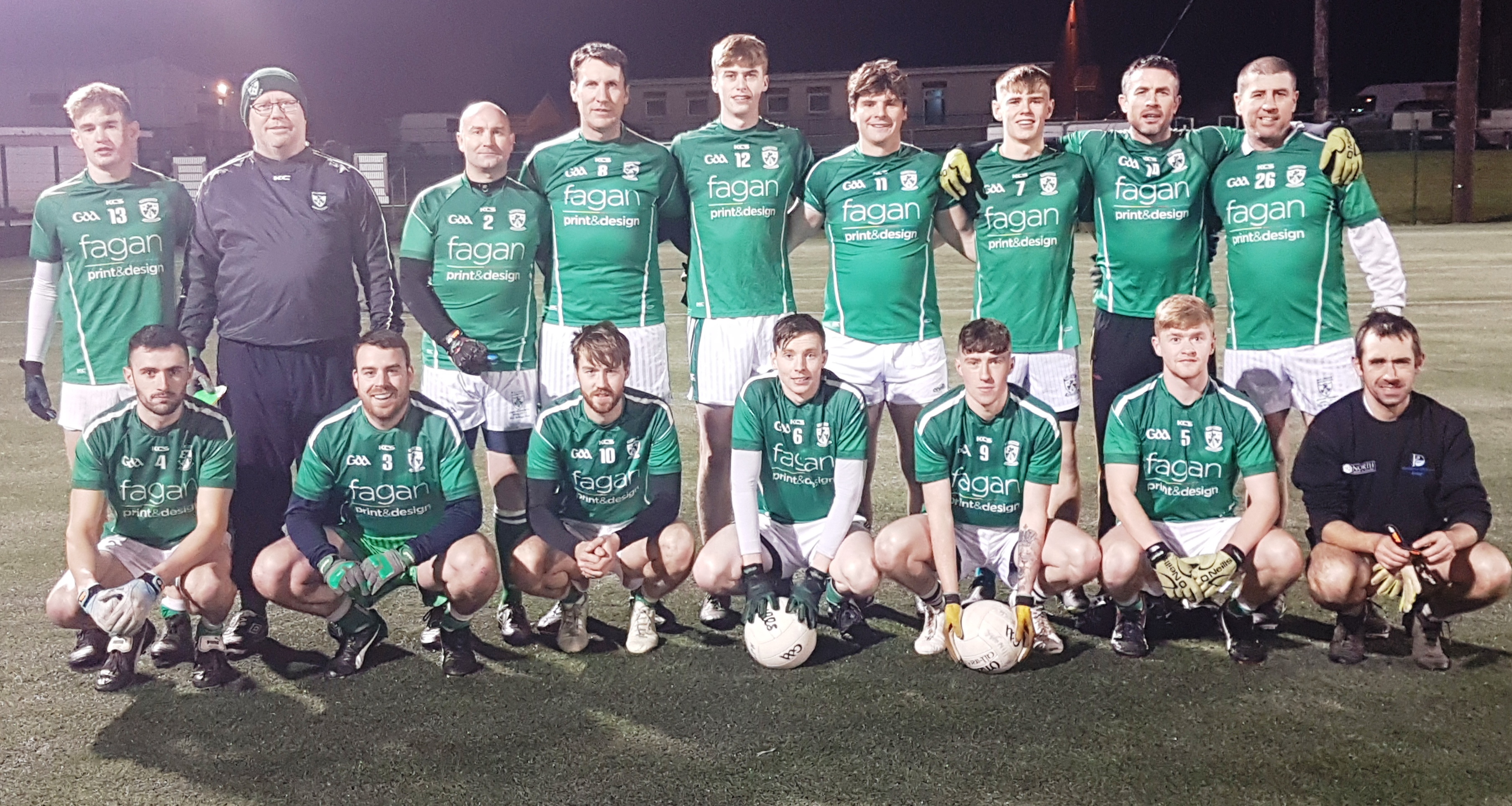 Mullingar Shamrocks qualified for the final of the Junior B Football competition with this fine victory over Rosemount in frosty Lakepoint Park on Friday night. Shamrocks began in impressive fashion with Marc Eivers scoring with the first attack and this was followed by two points from the ageless Gary Corroon. Ben Cox reduced the deficit with a pointed free but Mullingar Shamrocks responded with a brilliantly engineered goal that began with a sideline kick and after a series of passes David Gavin gained possession and broke through on goal and a super-fast exchange of passes with Shane Colleary ended with Gavin crashing the ball to the net. Ben Cox and David Gavin scored points before Rosemount with a goal and a point from Ritchie Brien made a significant dent on the Shamrocks lead. This was self-inflicted as Shamrocks played some great football but poor finishing and hasty shooting let the side down. Shane Colleary worked hard and pointed but Ben Cox added two more points and after all the good play Shamrocks trailed at the interval (1-6 to 1-5).

A Lorcan Daly point extended the Rosemount lead but David Gavin responded with a like score. This was followed by what was probably the most significant score of the night when Shane Colleary goaled to restore the Shamrocks lead (2-6 to 1-7). Ben Cox and Gary Corroon swapped points; Adam McCormack, Shane Colleary and Gary Corroon (0-2) extended the Shamrocks lead to six points (2-11 to 1-8). Another big moment came midway through when Robbie Boyle saved brilliantly from Lorcan Daly and Ryan Blundell brilliantly blocked the second attempt. Two points from Lorcan Daly reduced the deficit with ten minutes remaining before Adam McCormack climbed high to punch the ball over from a Marc Eivers 45. Marc was outstanding on the night and his midfield performance laid the foundation for the Shamrocks victory but he has not yet perfected the art of chipping the goalkeeper although he's working on it. David Gavin, one of the stars of the frosty night, scored Shamrocks final point, Rosemount added two to their total and when Mickey Dan Murtagh blew the final whistle, Mullingar Shamrocks were leading by 2-13 to 1-11 and for the first time in a long time we had finished ahead of Rosemount in a grade other than senior. What's seldom etc ...

It was a great team victory with all involved contributing to the win. Robbie Boyle and Shane Colleary rolled back the years in style. Back in 1995 before 3G pitches were invented and many of his Shamrocks team mates or Rosemount opponents were born, Robbie Boyle played on the winning Dublin team that defeated Tyrone in that famous All-Ireland final when Charlie Redmond played on for a while after being sent off and Peter Canavan scored 0-11 of Tyrone's 0-12. Robbie's handling and kicking against Rosemount was exemplary and the great second half save proved that class is permanent. Shane Colleary too continues to defy the years and the man who scored the famous goal in the 2004 Leinster final against Wexford when Westmeath won the Leinster title played a key role in the Shamrocks victory. But it was a night when the young and not so young combined for a great win.