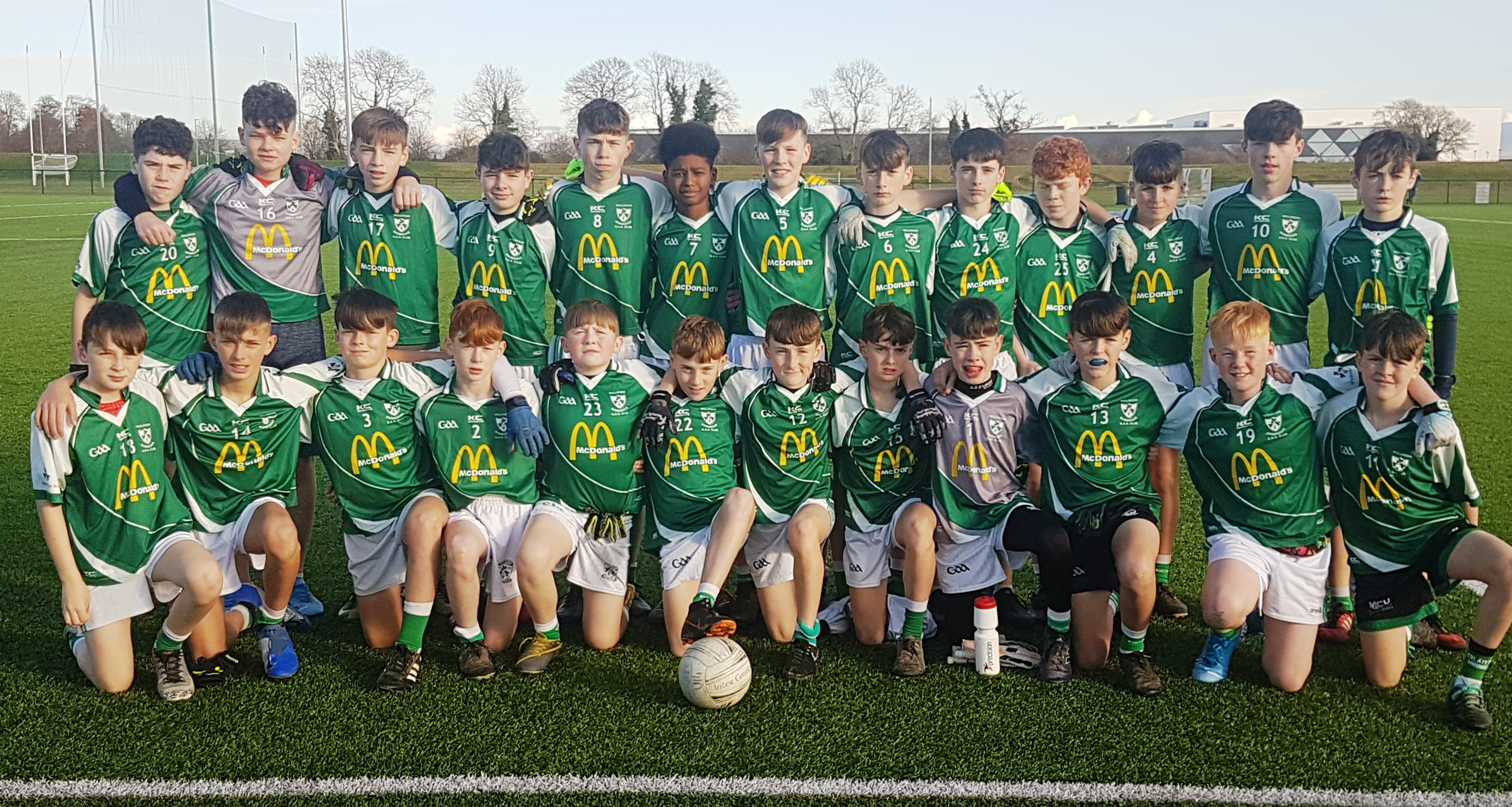 At half-time it looked as if this was going to be one of those reports without any score attached as Mullingar Shamrocks played the opening half at a leisurely pace in contrast to the turbo-charged opening by St Mary's. The result was inevitable and the boys in green and white trailed by sixteen points when the referee blew for the interval break. If it had been a boxing match, he would probably have called a halt at this stage. Fortunately neither the Mullingar mentors or players threw in the towel and the players delivered a remarkable second half performance that just fell short and St Mary's were relieved to hear the final whistle as they collected the Leinster title by a one goal margin.

Mullingar Shamrocks led by 0-2 to 0-1 after six minutes with Conor Heffernan and Ryan Kelly from a 45 getting the scores. But that was as good as it got for the remainder of the half as St Mary's inspired by brilliant displays by Josh Taaffe and Adam Gillespie in particular and Cian Lane and Lorcan Buckley to a lesser extent with their skill, fitness, game sense and running inflicted serious damage on the Shamrocks midfield and defence. Team captain Gillespie (no. 7) who scored two superb goals as well as a number of points and Taaffe (no.10) were excellent. Conor Heffernan and Ryan Kelly excelled for Shamrocks in this half and Heffernan added two more points to his tally, Alex Sheerin pointed after a great solo-run and Matthew Shaw also pointed to leave the half-time score reading 5-7 to 0-6. And but for at least three great Paul Keating saves it could have been much worse. However Shamrocks also wasted some good scoring opportunities also and in the end these proved to be costly.

The second half was a different story as the young Shamrocks players and their mentors reacted brilliantly to the situation. Críostóir Ormsby was assigned man marking duties on Adam Gillespie and neutralised his powerful influence. Alex Sheerin began the comeback when he goaled in the opening minute but this was almost immediately neutralised when Josh Taaffe turned creator once again and set up Gillespie for his third goal. Alex Sheerin goaled once again and Gavin Pierce scored a great solo goal as he created space to shoot where none existed. The lead was cut to ten points and at this stage the St Mary's goalkeeper Tiernan Markey was seen to good effect with a number of fine saves. Alex Sheering was flying and added another point before Conor Heffernan who had a superb game blasted to the net. Shamrocks were well and truly back in business as the scoreboard read 6-7 to 4-7 with less than ten minutes remaining. A great through ball from Callum Rigney- Clyne (who was a great steadying influence in the second half) released Alex Sheerin one-on-one with the goalkeeper and when Alex is this position the result is inevitable. GOAL and there was just three points separating the sides. Adam Gillespie managed to escape Críostóir's shackles for once and soloed through but his blasted shot for goal was brilliantly turned over the bar by Paul Keating and Conor Heffernan replied immediately with another Shamrocks point. Gavin Pierce also pointed to reduce the deficit to two points and in the final hectic minutes Cian Lane had the last point of the day to secure the title for St Mary's on a 6-9 to 5-9 scoreline. And in fairness the Ardee boys probably deserved the title.

Giovanni Trappatoni is wiser than most football managers and teams would do well to remember his famous comment at one Irish press conference:' Be careful the cat ... no say the cat is in the sack, when the cat is no in the sack'.

The end result was disappointing but that is all as the boys proved their ability and courage in the face of adversity with a superb second half performance inspired by a magic Alex Sheerin hat-trick. Someone said it was boys against men in the first half; in the second half the Shamrocks boys became men. Roll on 2020 when these boys progress to under-14 level. The future is bright and thanks to Tom Ormsby, Oliver Keating, Tony Sheerin, Daragh Maguire and Barry Maguire for all their work with this group of players during the year.