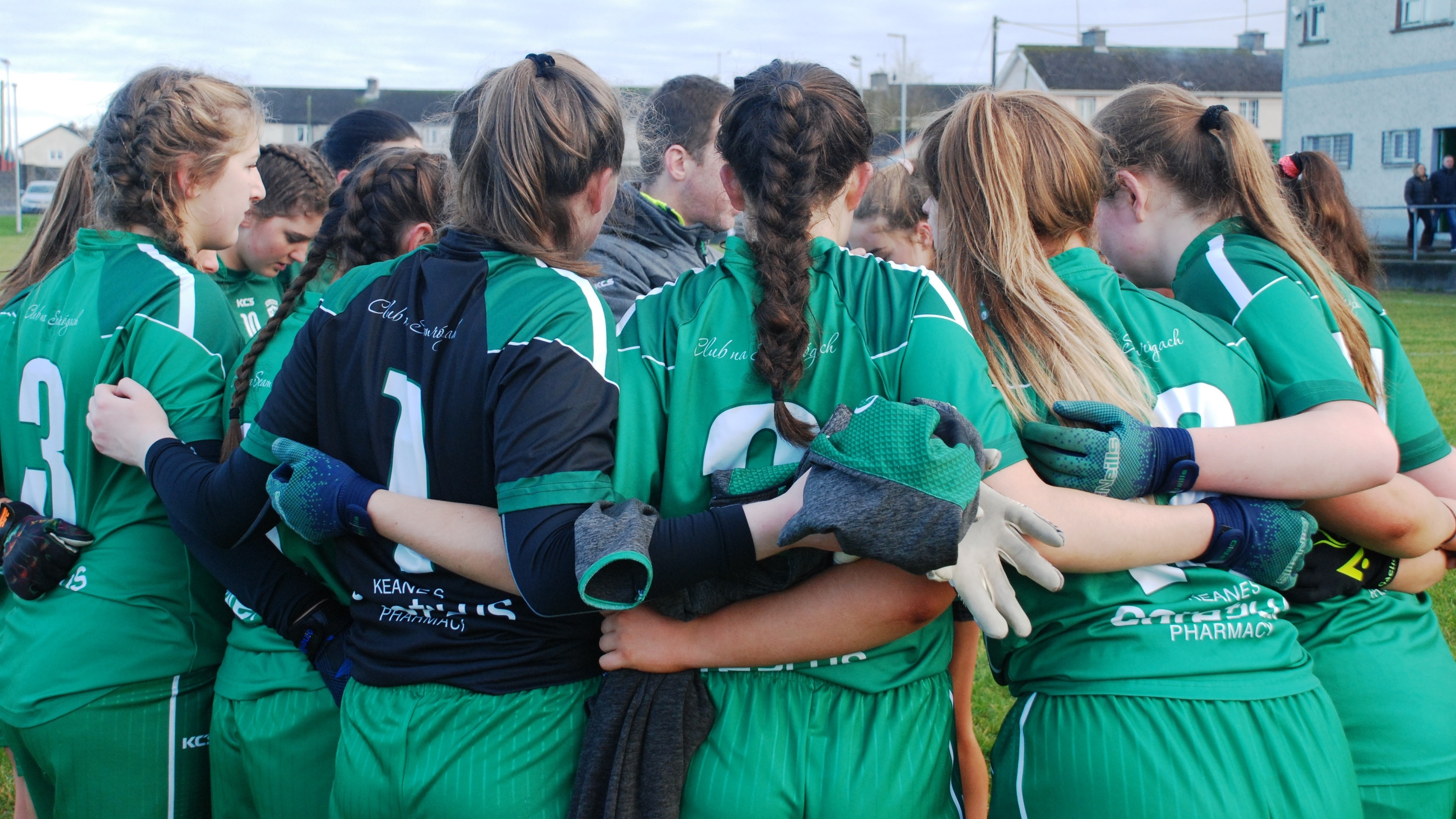 It was heart break for the Mullingar Shamrocks girls as St Loman's eventually emerged victorious in this pulsating LGFA Minor Final played in Springfield on Sunday afternoon. The early stages were dominated by St Loman's but the girls in blue failed to transform this control on to scores on the board. This was partly the result of some brilliant defending by the Mullingar Shamrocks girls with Carla Gibney and Annemarie O'Reilly showing the way and Isabelle Clinton a very safe goalkeeper whose handling and kicking were excellent. In addition the St Loman's shooting was erratic and the series of misses included a number of frees that were firmly embedded in the scoreable category. Annie Graham opened the scoring for St Loman's with a fine point but this was balanced by a point from Susanna Buckley after a great pass by Katie Kelly created the opening. Sarah Geoghegan and Niamh McGinley exchanged points before the game swung in Mullingar Shamrocks favour in the final ten minutes of the half; Mia Gilligan ghosted behind the St Loman's defence and punched the ball to the net and Holly McCormack added a point to secure an interval lead of 1-3 to 0-2 for Mullingar Shamrocks.

The Shamrocks girls continued to dominate after the restart. Laura Culkin pointed after a great turnover by Annmarie O'Reilly, a Chloe Smullen rocket was brilliantly tipped over the bar by St Loman's goalkeeper Jane McKenna. Vicky Carr took control of the free taking duties for St Loman's and pointed from long range but this was neutralised by a similar score by Chloe Smullen. This point by Vicky Carr was the first of what proved to be a 2-9 total before the final ended after extra time. Laura Culken turned provider for Holly McCormack who scored Shamrocks second goal and extend the Shamrocks lead to nine points with twenty minutes remaining (2-6 to 0-3). It was a remarkable transformation by the Shamrocks girls.

St Loman's however were not for turning and inspired by Vicky Carr began the salvage operation that was ultimately successful. The young halftime substitute Caoimhe Kilmurray, who played a key role in her team's comeback, scored St Loman's first goal. Carr pointed again and followed this with a goal with a shot that dipped under the crossbar despite the best efforts of Isabelle Clinton to keep her net intact. Carr followed with two more pointed frees to send St Loman's into a one point lead. In the final hectic minutes Mullingar Shamrocks reacted with renewed energy and Máiread Newman scored a superb equalising point from an almost impossible angle. Crucially in the final minutes, Mullingar Shamrocks lost their most dangerous forward and free taker Chloe Smullen with concussion and this may have been costly as in the final minutes it was Shamrocks turn to miss two scoreable frees. At the end of normal time the teams were level 2-7 each and two ten minute periods of extra time followed.

Vicky Carr was the first to score after the restart; the Shamrock response was immediate as Megan Reid equalised. This proved to be Shamrocks final score. and Vicky Carr wrapped up the title for St Loman's when she gained possession from the throw-in at the start of the second period of extra time and raced through the Shamrocks defence and scored a goal that was an exact replica of her first goal as the ball once again dipped under the crossbar past Isabelle Clinton.

It was disappointment in the end for the girls but they can take consolation from the fact that it was their best performance of the year in what was a brilliant advertisement for LGF. Isabelle Clinton is an excellent goalkeeper and the full back line of Ruth Keane Carla Gibney and Eve Hynes defended magnificently as did the halfback line of Annemarie O’Reilly, Catherine Tubridy and Jenna Kelly with Carla and Annemarie magnificent. Susanna Buckley and Máiread Newman covered acres of ground as they worked hard at midfield and won plenty of possession and Máiread's equalising point is a contender for the Shamrocks score of the year. Our half-forward line kicked the crucial scores, the loss of Chloe was severe and it was great to have the soccer international back in the Shamrocks colours for this championship. Our full-forward line also played their part with Mia ghosting in for a great goal, Katie Kelly distributing in her normal intelligent manner and Laura Culkin having one of her finest games in the Shamrocks colours. It is important that these girls continue in the game. Well done to all and to Ciarán, Karen, Kieran and Debbie for all the hard work.