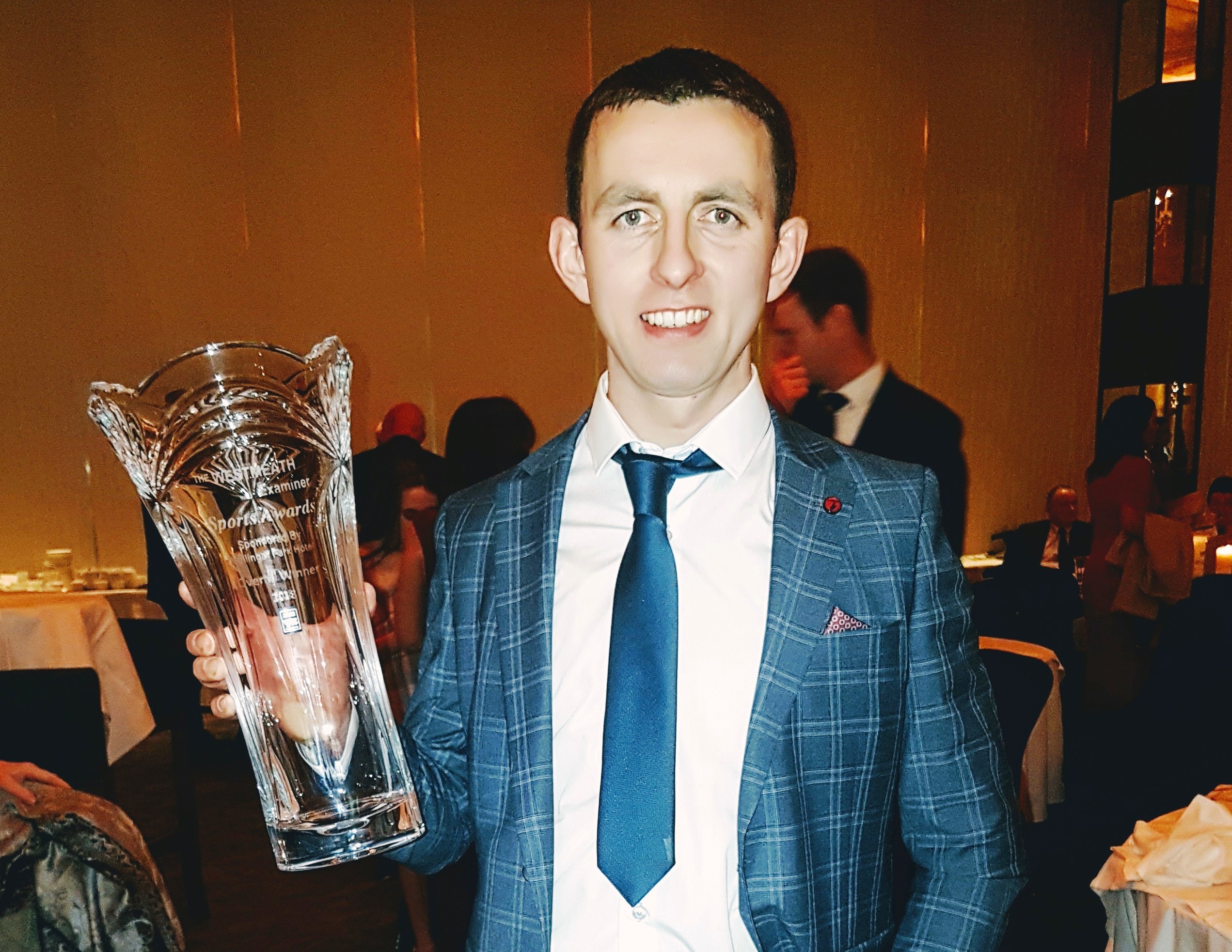 Derek McGee: the latest inductee to the ex-Mullingar Shamrocks Footballer Hall of Fame ...

In these pages we like to recognise the achievements of our ex-players who achieve excellence in other fields. Derek McGee is the latest addition to the ranks of the great escapees. And if you read this and would like to invest some sponsorship money in sport, Derek McGee would love to hear from you. You'll find him out in Knockdrin. On Friday last Derek McGee was announced as the Westmeath Examiner Sports Star of the Year for 2018, a justified recognition for his motorcycle roadracing achievements during the year. Back in 2000 Darren was a member of an all-conquering Mullingar Shamrocks Under-14 team, the last (?) such team in the club to win the Triple Crown of league, championship and Féile titles. This panel was composed of some of the gentlest souls to emerge from the club's underage programme in the history of the club and was managed by Pat Collins, Sam Madden, Luke Dempsey and Ned Moore (yes, the same Luke and Ned who worked from the blue and green corners in the 2018 senior county final). The panel also included multi-All-Ireland title winning handballer, Robert McCarthy and leading New York Attorney Darren Moore.

On Friday night last in the Mullingar Park Hotel, Derek, in the course of his interview with Robbie Irwin, delivered the quote of the night as he explained what happened when he 'was caught up in another man's crash' on a practice lap during the Ulster Grand Prix races in August when he was lapping at an average speed of 129.288 mph. 'And what speed were you doing Derek, when you crashed?' Robbie Irwin enquired. 'About 150 MPH, Robbie', was Derek's nonchalant reply. As he was sliding down the road, Derek was hit by his own Kawasaki bike, a collision that inflicted most of the injuries on the 'Mullingar Rocket'. When the medics were finished their reconnaissance on Derek's battered body, their damage-list included a broken femur, a fractured pelvis, a fractured collar bone, a collapsed lung and four fractured ribs. Motorbike road racers are hardy boys and Derek was back on his bike within a month!

Derek McGee's achievements in 2018 were topped by his second place position in the Bennett's Lightweight Class in the Isle of Man TT races in June when he finished just behind the great Michael Dunlop, one of the most successful Isle of Man TT racers in history. Derek was the first racer from the Republic of Ireland to stand on the Isle of Man podium in thirteen years. McGee had a wonderful run of 14 victories mid-season when he won five national races at the inaugural Enniskillen event where he set four lap records, five more at Faugheen (Tipperary), and added another four at Walderstown on his way to clinching three Irish Road Race Championships in the Superbike, Supersport and Supertwin classes. In addition, Derek won the Geoff Duke Trophy for the 2018 season awarded to the rider with the greatest number of points accumulated over a season of road racing. Magee was 17 points ahead of his nearest rival for the 21 counting events for the season that began in Cookstown in April and ended in Macau in November. Derek McGee's achievements are all the more noteworthy as he competes with a support team composed entirely of volunteers with just one professional full time mechanic employed.

It was all very different back in 2000 when Derek was a regular at cornerback on the Mullingar Shamrocks under-14 team that swept the boards. The Féile na nÓg title was captured on 13 May when St Loman's were beaten in the final in a game staged as the curtain raiser to the All-Ireland Under-21 football final in which Tyrone defeated Limerick. There was plenty of green and white in Cusack Park that day and the Limerick supporters helped roar Mullingar Shamrocks to a 3-5 to 1-2 victory after Loman's were held scoreless during the second half. Mullingar Shamrocks: Dermot Earley; Brendan Kerrigan, Keith Moore, Derek McGee; David O'Callaghan, Micheál Curley (Captain), David Marley; Mark McLoughlin, Stephen Bolger; Ciarán O' Meara, Fiachra Spellman (2-2), Robert Dempsey; Darren Moore, Colin Connolly (0-1), Brian Swarbrigg (1-2). Other panellists: Andy Cullen, David Bell, David Morley, Robert McCarthy, Denis O'Rourke, Ciarán Curley; Damien Morris, Pearse Madden, Michael Anderson and Brian O'Donovan.

The Féile na nÓg was staged in Dublin in 2000 and the luxury coach driven by Mick Price departed Springfield shortly after noon on Friday July 1. The qualified teams assembled in Parnell Square in Dublin on Friday evening and paraded down O'Connell Street on their way to Croke Park. Mullingar Shamrocks were hosted by the St Kerin's-Killeen's Kilnamanagh Club who also provided the first opposition for the boys on Saturday morning. The host club was easily beaten 3-7 to 1-4. The cavalcade then moved to St Mark's Tallaght and again Shamrocks had an easy victory beating the St Mark's lads 3-7 to 0-1. The final match of the group pitted Shamrocks against the Down champions Rostrevor. The latter equalised with the last kick of the game and the 2-4 (MS) to 0-10 draw qualified both teams for the knockout stages of the All-Ireland. On Sunday morning, at the Ballyboden-St Enda's grounds, Shamrocks beat Portmarnock 2-5 to 1-5 and qualified for the semi-final. A trip to Croke Park was next on the agenda and team captain Micheál Curley and Damian Morris carried the Mullingar Shamrocks banner in the Féile parade which was held before Dublin and Westmeath played in the Leinster senior championship (1-14 to 0-11 in favour of Dublin). It was then back to Ballyboden for the semi-final in which the Mullingar Shamrocks lads finally ran out of steam and the jet-lagged boys were beaten 1-4 to 0-2 by Rostrevor. What might have been an All-Ireland Féile title was left behind in this match in which the Shamrocks boys failed to produce the form displayed in the earlier rounds.

Derek McGee was ever-present in the Mullingar Shamrocks jersey in these games and since he first played under-12 for the club. Even then the fascination with motorbikes was evident and it was clear that when the opportunity presented itself road racing would be Derek's sport of choice.